This astrology site is devoted to the research of stationary planets. It has been created with the goal of bringing more attention to the importance of stationary planets, particularly in the natal /lagna chart. Stationary planets appear to have extremely strong potential and significance. As with all astrology, the stars impel, they don’t compel. Any potential may be in one’s natal chart, but that doesn’t necessarily mean that someone will use that potential, or use it to its full extent. This site is to give examples of people that have used these energies, in positive and negative ways.

What is a stationary planet? From our perspective on earth, planets are said to be in direct or retrograde motion. Direct motion means that a given planet appears to be moving forward from our viewing perspective. As planets appear to slow down, before they go into retrograde motion, they appear to be stationary. The example often given is sitting in a train or car and seeing another train pass, but before it passes it can appear as though it’s still because if it’s moving the same speed you cannot see that it’s motion. A planet that is stationary before going retrograde is said to be Stationary Retrograde, and as it leaves the retrograde phase back to direct, that phase is called Stationary Direct. A planet’s subtle energy is at it’s greatest influence during these stationary phases.

The evaluation of when a planet is in the stationary phase is subjective, and based on the interpretation of each individual astrologer. Planets are never technically still, just appear to be so from our perspective on earth. The best way to check the speed of a planet on any give date is to look at an ephemeris. From some longer discussions of this, see: https://www.astro.com/astrowiki/en/Stationary_Phase and https://www.youtube.com/watch?v=57PGW7f2raI&feature=youtu.be&t=13m10s

Stationary planets in a chart can often be strong enough to be considered the ruler of the chart. When there are multiple stationary planets, you will have to use your own judgement to figure out which is the strongest planet, looking at the planetary dignity (e.g. exaltation vs debilitation, friends vs enemy signs), shadbala, vimshopak (strength through divisional charts) , etc.

You can find stationary planets by entering birth data at www.astro.com; stationary planets will not be indicated on the main chart drawing, you need to click “Additional Tables (PDF)” and see if there is an Sd (stationary direct) or Sr (stationary retrograde) next to any planet or planets. If you have a correct birth time, you can see which house the planet(s) are in as well, which will have greater significance than the other planets that are not stationary.

You can also find stationary planets at horoscopes.astro-seek.com
1. Hover over Astro tools and select Ephemeris Tables (1800-2100)
2. The page will load to the current year. Scroll down the page to select a different year
3. Next select the month you want from the available links
5. Under the dropdown menu for Ephemeris, select Planet Speed
6. For example, if you look at January 2019, you will see that Uranus stationed on the 6th and 7th, when the speed went from -0 to 0. 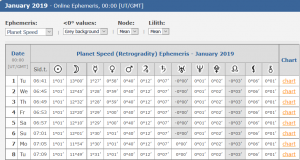